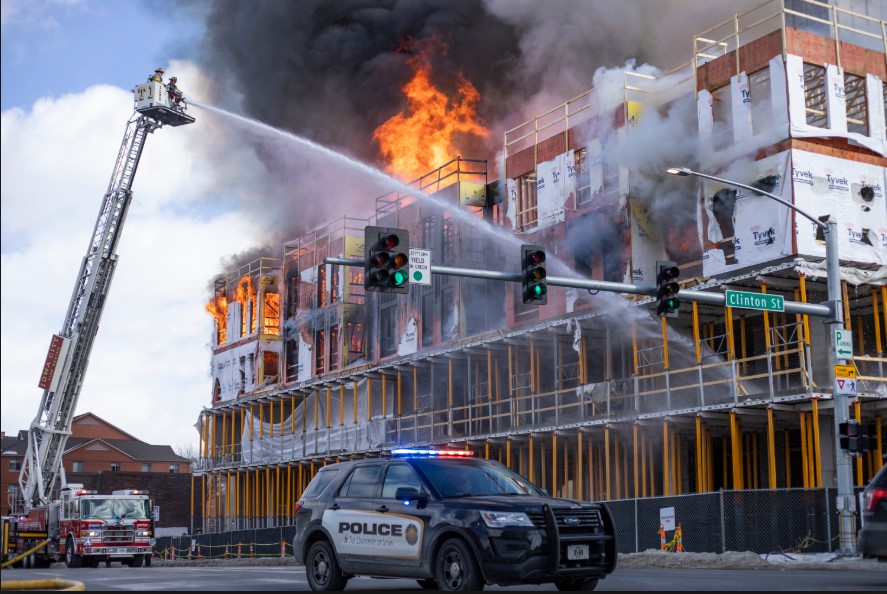 GILBERT – A sawmill fire in Gilbert brought firefighters from five fire departments to fight the blaze.

Gilbert Forest Products, owned by Everett Hannah, previously known as Gilbert Lumber Company, caught fire in the late hours of Wednesday night into Thursday morning. Dispatchers said the call report the fire came in around 12:15 a.m. and firefighters fought the blaze for the next three hours.

The back portion of the maintenance building was already engulfed in flames when the Gilbert Volunteer Fire Department (GVFD) arrived on the scene around 12:25 a.m.

The GVFD Fire Chief, Mike Tolley, said, “The blaze burned hot and fast, and was a five alarm fire which required assistance from four other fire departments.”

Baisden, Hanover, Wharncliffe and Coal Mountain Volunteer Fire Departments were dispatched to the scene to assist the GVFD. With the help and cooperation of all five fire departments, the fire was contained preventing the fire from spreading to the main building.

“Everyone worked hard together and did a great job as a team. We were able to keep the fire off the electrical lines and the transformer that ran only about ten feet above the building.” said Tolley. “This was a huge concern for us because had the lines caught fire we would have had to step back and let the place burn. I am proud of all the departments for pulling together like this.”

General Manager, Kenny Stewart said “There are two mills on the site where the fire occurred and we will begin to run two shifts of work on the one mill that was not affected by the fire. This will allow our employees to continue working. The mill destroyed by the fire will be up and running as soon as possible and that should not be too long.”

The Mill was closed at the time of the fire therefore no employees were on site. No firefighters suffered any injuries while fighting the fire.

Owner, Everett Hannah reported damages at approximately $225,000 as the maintenance building was a total loss. Hannah contacted the State Fire Marshall to investigate even though there was no indication of arson.

Mingo County Commissioner Diann Hannah commented on what a great job the fire fighters did in controlling the fire and how thankful she is for their committed service.